“Reaching the finish line in equality” is the motto used by the Commissioner for the Protection of Equality for the fifth year in the row during Belgrade Marathon  to extend its support to persons with disability who face different forms of discrimination in their everyday life.

Visitors of the 29th Belgrade Marathon had an opportunity to mingle and talk with athletes with disability and to become better acquainted with the institution of the Commissioner and its scope of work by talking directly to Brankica Janković, the Commissioner and employees.

Commissioner Janković said that there are approximately 700,000 people living with disability in Serbia and that all barriers and not only architectural ones need to be removed stressing that this action is geared towards promoting equal opportunities and same conditions for all citizens.

“Reaching the finish line in equality” was an opportunity for citizens to meet with and talk to Željko Dimitrijević 2012 London Paralympic Games gold medalist in men’s club throw discipline and to Draženko Mitrović, world record holder in discus throwing, world and European champion and vice-champion of the Paralympic Games in London.

This year too “Reaching the finish line in equality” drive attracted a large number of people, which is a boost to continue with efforts aimed at promoting the position of vulnerable social groups at sports events.

T-shirts and baseball caps were given out to visitors who had an opportunity to test their knowledge by taking a discrimination and human rights related survey. Around 300 surveys were collected and processed.

“Reaching the finish line in equality” drive was jointly organized in partnership with the Serbian Association of People with Disability. 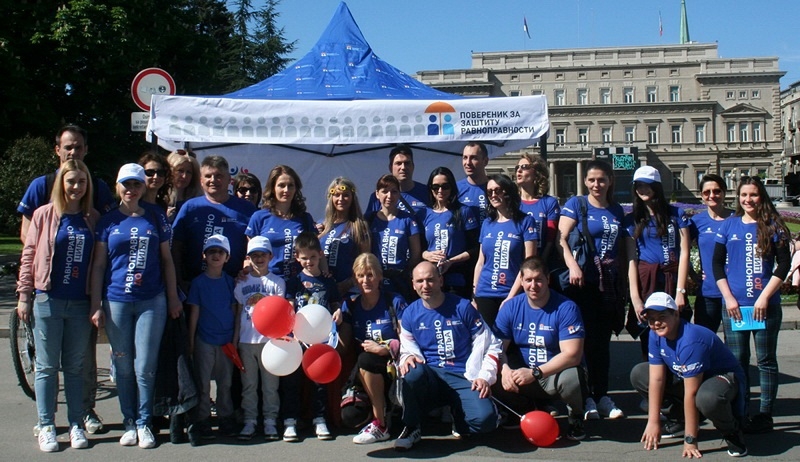